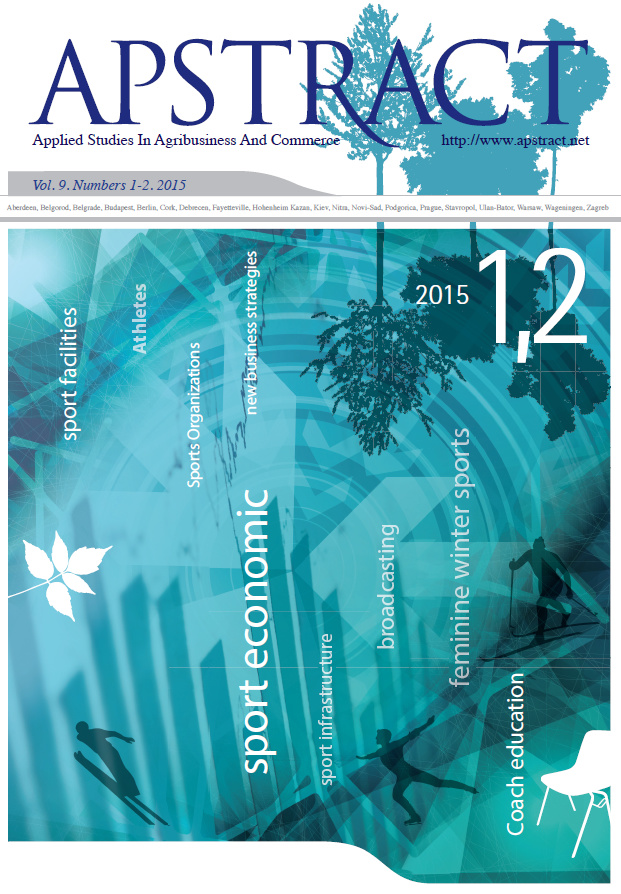 In the 21st century, sport is not just a fun, social cohesive force but also a business; it has become an independent industry by now and several countries possess developed sport markets. According to estimates, sport accounts for 4% of the EU’s GDP. The actuality of our research is given by the fact that the economic aspect of sports develops continuously which is also due to that more and more amounts already stream into sports in our days. In Hungary, sport is mainly state aided and has mostly financing problems while the sport businesses existing in the more developed Western Europe are principally sponsored by the private sector. The government considers sport as a strategic branch (HERCZEG et al, 2015) and manages as such because they see the international breakthrough potencies in sport as well. Sport companies must also adapt the business-based thinking, which requires the strategic planning and operation (BECSKY, 2011). The research covers the subject of economic approach of the players’ rights. The task of accounting is to give a true and fair image about the property, income and financial situation of an undertaking. Information provided by accounting is essential for both the management decisionmaking and the market operators. In Hungary, the sports undertakings, as each managing entity, have to prepare their statements according to the Act C of 2000 on Accounting (AoA.) (NAGY – BÁCSNÉ BÁBA, 2014). The purpose of this research is to examine how a domestic sports undertaking demonstrates the value of available players in the books and how the incomes and expenditures incurred with the players are accounted for, based on the regulations of the Hungarian, international associations and the Union of European Football Associations (hereinafter: UEFA). In order that the leaders of the businesses can make quick and appropriate economic decisions, it is essential in this intensively changing world that an enterprise should have a well-functioning accounting system based on up-to-date information. International Financial Reporting Standards (hereinafter: IFRS) are intended to provide the comparability across borders. Firstly, we deal with the accounting reporting system, both the Hungarian, international financial reporting standards and, relating to UEFA, the investigation of the intangible assets to a great extent during analysing the balance sheets. Then, we examine the income statements from the viewpoint player transfers. To what extent the rules of a statement laid down by UEFA differ from the ones of a statement prepared according to AoA? What is the difference in domestic and international relations? In this study, we search after the answers for questions mentioned before.