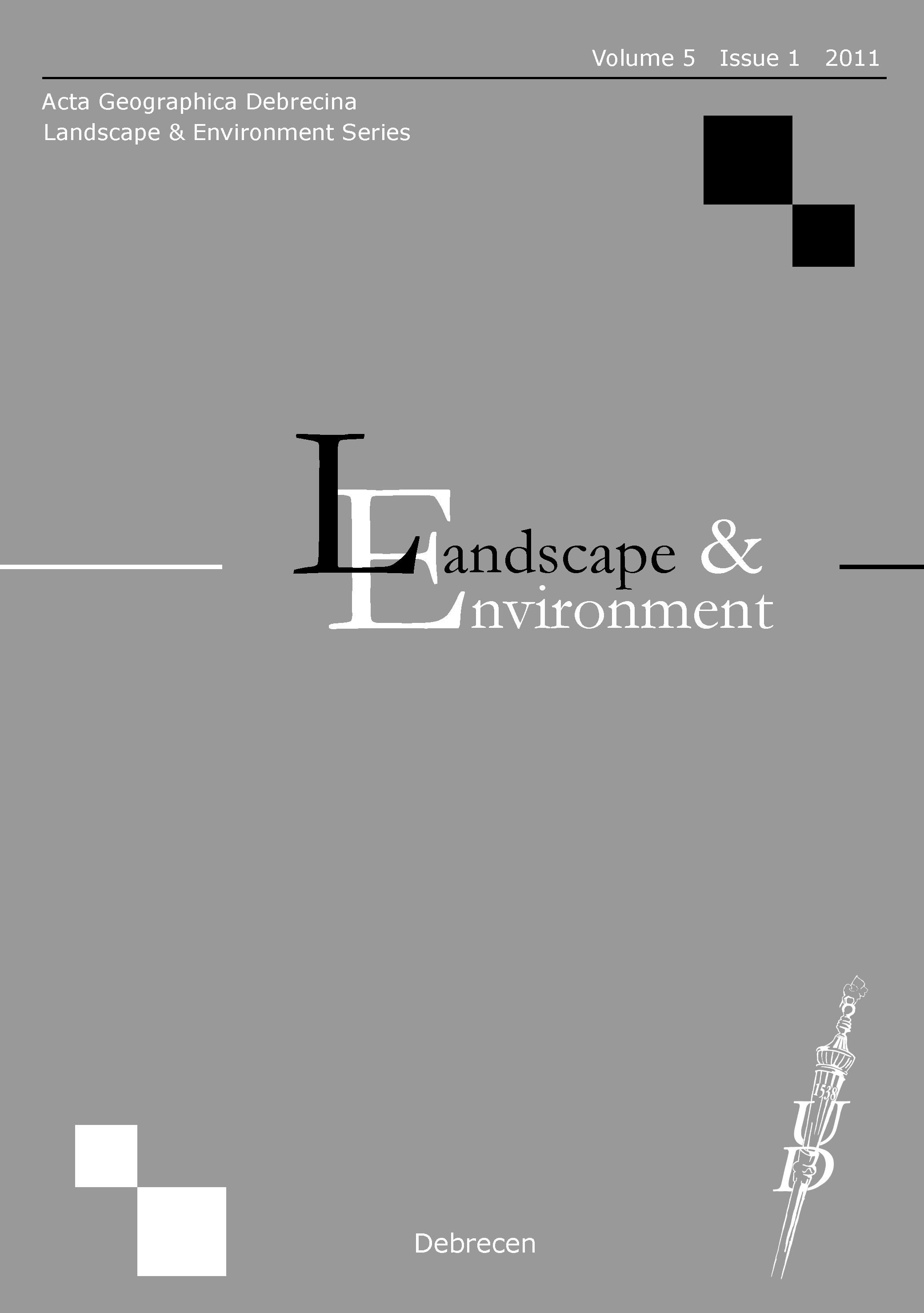 The correct delineation of geographical and landscape ecological units, being the fundamental territorial domains of both physical and human geography, is very important from the aspect of several other related disciplines as well. It is hard to tell how distinct landscape units, or landscape ecological units can be, from a statistical point of view. The present study investigates how welldefined (definable) geographical units (landscapes, landscape types) are in a statistical and mathematical sense. Since landscape forming factors do not exhibit distinct boundaries either, during the analysis it is better to consider them as ecotones. Integration of factors, and the unclear interpretation of present landscape boundaries do further complicate the sound mathematical evaluation of the studied geographical units. In order to resolve these problem GIS techniques were applied.

Reliability of the road system illustrated on topographic maps with 1:10000 scale is questionable due to their age, but surveying a territory with area over 100 hectares is expensive with classical geodetic tools, although there is no need of geodetic accuracy in most cases. GPS-based mapping method described in this paper is suitable in these situations. The main concept is to keep the costs of the survey as low as possible, therefore free GIS applications and databases were used with navigation purpose GPS receivers. The accuracy provided by these devices is good enough for those purposes where the accuracy of topographic map with 1:10000 scale is adequate. GPS-based mapping can be done to update the road system of existing map or create own detailed road databases. The result of the work is not just a database but a navigation capable digital map, which can aid further activities on the field, like geographic researches, environment protection, tourism, fire service etc.

Grain surface features and clay mineralogy of the quaternary sediments from Western Deccan Trap Region, India, and their palaeoclimatic significance

Quartz sand grains obtained from a deeply gullied topography along the banks of two tributaries of River Pravara in Maharashtra (India) have been examined with a scanning electron microscope (SEM). Quartz grains have been selected after a heavy mineral separation and micro-photographs of each grain were taken at various angles and magnifications. The sediments reveal features resulting from mechanical grinding as well as from chemical alteration. Conchoidal fractures, cleavage planes, grooves, v-shaped indentations etc. are the mechanical features documented on the grains whereas solution pits of varying sizes and intensity, precipitation surfaces, oriented v-pits, solution crevasses and etching are the features of chemical origin. Several evidences indicate that the samples have undergone digenetic changes. Few grains show the features of intense chemical breakdown. The overall assemblages of the grain surface features suggest that the samples have been subjected to subaqueous transport for a considerable period of time. The minor chemical features such as solution pits or semi circular arcuate steps found in abundance on these grains are due to the dissolution of the sediments in a low energy fluviatile environment. For clay mineralogy, fractions between <2  and <0.2 mm were separated out from the sediments. The clay fractions were then subjected to examination by X-ray diffraction (XRD) of oriented K/Ca saturated samples using a Philips Diffractometer and Nifiltered Cu Ka radiation with the scanning speed of 1 0 2Ө min -1. The main clay minerals for all the samples are identical and show the presence of hydroxy-interlayered smectites with minor quantities of mica, kaolinite, smectites, quartz and feldspar. The first weathering product of the Deccan Basalt (DB) is the dioctahedral smectite. Since the present semi aridic climatic condition of the study area can not transform a smectite to HIS and either smectite to kaolin, it is quite likely that both the HIS and Sm/K are generated in the tropical humid climate of the Western Ghats and then carried through the exiting river system like Godavari, Adula and Mahalungi. Therefore it is evident that the clay minerals present in these sediments represent another climatic history more humid than the one prevailing at present.

One of the largest industrial spills in Europe occurred in the village of Kolontár (Hungary) on October 4, 2010. The primary objective of the hyperspectral remote sensing mission was to monitor that is necessary in order to estimate the environmental damage, the precise size of the polluted area, the rating of substance concentration in the mud, and the overall condition of the flooded district as soon as possible. The secondary objective was to provide geodetic data necessary for the high-resolution visual information from the data of an additional Lidar survey, and for the coherent modeling of the event. For quick assessment and remediation purposes, it was deemed important to estimate the thickness of the red mud, particularly the areas where it was deposited in a thick layer. The results showed that some of the existing tools can be easily modified and implemented to get the most out of the available advanced remote sensing data.