The purpose of this essay is to investigate some of the uses of English prepositions and Hungarian case endings employed to express spatial relations. The observation of invariant mistakes Hungarian native speakers learning English make initiated the investigation. The questions raised are: (a) where do the two systems match and where do mismat

...ches lie, (b) how do language users perceive the world, and (c) do speakers observe spatial relations as two-dimensional or three-dimensional cognitive models? Do different languages see the same thing as either three-dimensional, or two-dimensional?
Abondolo (1988) gives an adequate morphological analysis of ten Hungarian case-endings (inessive, illative, elative, superessive, delative, sublative adessive, ablative, allative and terminative) used in spatial reference, which give a closed set in references made to factors, such as (1) location which can be broken down as interior vs. exterior location with the latter being further analysable as superficial and proximal, and (2) orientation which can be analysed as zero orientation (position), source and goal. In addition to those in this list, two other case endings (genetive/dative and locative) are also used for expressing spatial relations but the last is only a variant of the inessive and superessive case-endings and is only used with place-names. The set is closed in the sense that the same item is meant to refer to the same sort of spatial relation in every case. Language textbooks, c.f. Benkő (1972) seem to suggest a neat match between the above Hungarian case endings and their English prepositional counterparts, e.g. London-ban (inessive) = in London.
The picture, however, is far from being so clear-cut. The data, which were taken from various dictionaries and textbooks, show that the choices of both the prepositions and the case endings listed above depend on how the speaker considers factors (1) and (2) and that proximity is very important. Instead of a one-to-one match between the prepositions and the case endings, we rather find that the above case endings will match a dual, and in some cases a tripartite system of prepositions with the correspondences found in the two languages, which yield the following chart: 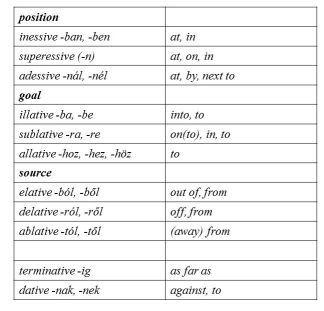 We suggest that languages may view or map the same physical entities in different ways, for example along surface vs. volume or goal vs. passage, etc.
Furthermore, we also find it possible that it is the language specific, inherent coding of the nominal phrase that decides – in many cases – upon the choice of prepositions and case endings.